When I was asked to write a blog post about something I feel passionate about in terms of game development there was something which was very prominent in my mind: the way in which people are treated in the so-called chain of command. 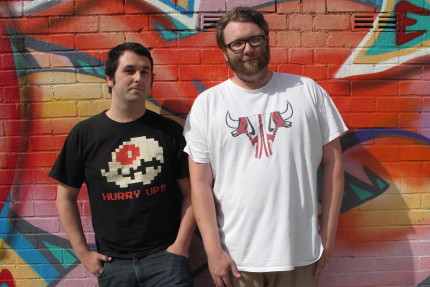 (Aj - right)
Looking at my career and the careers of my friends, it feels that the higher certain individuals move up that chain the more they behave like assholes to those below them. Whether this be seniors, leads, producers, directors, it was always the same, suddenly a holier than thou attitude of “Well, I’ve got a more important job title so I’m better than you,” appears.

One thing I didn’t understand until now is that job titles are just words. Since Dlala was formed last June, Craig [Thomas, co-founder Dlala Studios] and I have had an assortment of titles each. I’ve been Creative Director, Chief Creative Officer and now Chief Executive Officer and for the majority of that time we were the only two full time staff members!

Don’t get me wrong, job titles can serve a good purpose. Having roles defined can be a good thing, but not for the purpose of forcing authoritative nonsense down the throats of incredibly talented, and often underappreciated, individuals. Job roles, and their titles, should be seen as a driver and a reward, not as a stamp of power. Looking back on my own career now I can think of one time in particular that I had some absolutely horrendous arguments over a ‘promotion’. Reality was I was already doing the job itself. All the tasks, responsibilities, etc… they were all mine already, but I wanted that job title, I wanted that stamp of approval that acknowledged my hard work and effort. Not to feel superior to anyone but to know that I was progressing and recognised.

I should point out at this point that this isn’t the ranting of some disgruntled developer, or a chance for me to take cheap shots at people. This is a post from someone who has moved into a role which is more focused on production/direction/management. And in that role I try to remember the following two points every day:

1              Protect Your Team
“Congratulations! You’ve been promoted, you are now a manager.” What does this mean? This means you now have a responsibility to protect your team no matter what. The second Craig and I started hiring people we noticed a massive change of focus onto the security of our little family at Dlala. We know that if something went wrong tomorrow we could get back in the parents’ garages and start again, but now we won’t let it happen because we have four amazing guys who count on us to keep this studio going.

It’s not just about job security, though, you need to protect your team from blame. Reality is everyone fucks up and it shouldn’t be seen as a bad thing. The second you are scared to make mistakes is the second that making games becomes hard. Most important of all, protect them from yourself. It’s easy when you are being shouted at to turn around, blame your team, and then take them into a room and unleash on them. Your team should never be told, “If you don’t do better you will probably be out of job,” because it should never get to that point. Fear is an awful, unproductive motivator.

2              You need them, they don’t need you
How many successful projects have been made with just a producer, just a director or just a manager of some type? NONE. Now how many projects have been made by a single developer or a developer/artist combination? A metric fuck ton. Just remember that without your staff there is no game but without you there still could be.
As I said this isn’t a post for me to slag anyone off and this is definitely not me saying I know best. This is a post for me to warn myself and a reminder of what I don’t want to become.

This blog was written by AJ Grand-Scrutton, CEO of Dlala Studios. Visit http://dlalastudios.com/ for more information or contact AJ on Twitter @dnost.