For the nearly twenty-five years I’ve been working on videogames, there has been a strange double standard about narrative. On the one hand, game developers often like to dismiss the importance of narrative materials with statements like “it’s the gameplay that matters”, yet on the other hand players have always ‘voted with their money’ and put tremendous stock into good storytelling. Looking at the UK software charts for this week, it’s headed by FIFA 18 – which is clearly rather light on narrative! – but other than Street Fighter: 30th Anniversary and Sega Mega Drive Classics, the rest of the top ten is packed full of highly narrative experiences like Detroit: Become Human, Far Cry 5, God of War, Dark Souls Remastered, and Fallout 4.

I set up my company, International Hobo Ltd, because back in the nineties it was apparent that developers were having difficulty getting gameplay and stories to work together and it seemed sensible to develop a team that specialised in what we called at the time ‘design-integrated narrative’ or (more succinctly) ‘narrative design’. When Richard Boon came to work for us in 2000, his job title was ‘Narrative Designer and Script Writer’, and the term grew in popularity when Stephen Dinehart IV used ‘Narrative Designer’ as his job description at Relic back in 2006.

What I’ve come to realise over the last fifty videogame projects I’ve worked on, and particularly as a result of my research into how and why humans enjoy games (I’m presenting my latest findings on this at Develop:Brighton next month), is that “it’s the gameplay that matters” misunderstands the relationship between games and stories. It’s a mistake that scholars in game studies repeatedly make as well – they assume that the ‘game’ is the crunchy designed systems, and the ‘story’ is this kind of wrapping paper that you dress up the mechanics in. There might be a recognition of the importance of that ‘wrapper’ in getting players interested in playing the game, but sooner or later, everyone comes down to the importance of those game systems and the lesser role of narrative.

Trouble is, that doesn’t describe how people play games, much less why we enjoy them. 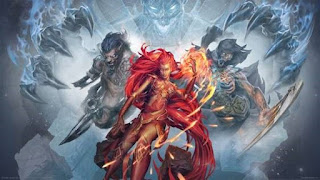 If you want to understand the relationship between games and stories, you have to start by recognising that stories are far more fundamental to the human experience than games. Stories are what we do – your whole sense of yourself as a being is rooted in the story you tell about yourself. We can’t not tell stories, because we’re wired up to think in imaginative ways, and stories are at heart structured imaginings. Other animals play – if you have a dog or a cat, you won’t be in any doubt about this! – and other animals play things we can call games (like ‘fetch’, or ‘chase the laser dot’), but no other creature makes such elaborate games, and again, it’s because games are also at their core structured imaginings. The rules of chess, and the possibility that some state of the game means somebody wins is both the foundation of the game of chess, and the basis for stories about chess.

Games and stories belong together – every game tells stories for the player, either about what the player does (winning, getting a ‘rare item’, levelling up) or about what happens in the fictional world of the game (getting revenge, rescuing a friend, finding a forgotten tomb). It’s inevitable because humans are a story-making species – we experience life as a story, and everything that happens can be understood this way. But there is a truth to the division between ‘game’ and ‘story’ in that sometimes games tack on a story that has nothing to do with the game experience at all… but it is nothing essential, nothing fundamental, that makes this split between games and stories: it’s just bad game design, or rather, bad narrative design.

The best game stories are those that use the systems of the game productively to create narrative experiences that the player feels like they are crafting for themselves. Often, there’s a bit of legerdemain involved… an illusion of greater control than actually exists – but players who are enjoying themselves will always come along for the ride! There are lots of different ways to do this – including at one extreme the Japanese RPG approach of having an animated movie that punctuates playable sections, and at the other extreme games like The Sims that leave it almost entirely up to the player to create their story while still providing a set of carefully crafted props (houses, furniture, ‘dolls’) for the player to use as raw materials. What works is what the players are happy to go along with – which is a surprisingly large set of things!

Good narrative design is about aligning the story and the game so they work together, and this process often begins by examining which stories the game systems naturally produce. Commercial videogames benefit from stories in part because the fictional world of any game is one of the main draws to get players interested in the first place (or to put it another way, whatever we may think about marketing, it does work!). But they also benefit because stories are easier to enjoy than most games, which require you to spend some time getting to grips with them in order to get full value. Of course, plenty of people enjoy stories without games – the movie industry is ticking along quite nicely! – but not so many people enjoy games without stories. Commercially successful games stripped of all their fictional elements are rare, and almost always abstract and fairly simple like Tetris or Super Hexagon. And even these tell stories – “the straight finally came!” is a Tetris classic!

Players have a variety of reasons for playing and enjoying games – International Hobo currently uses a model of ten player motives, which I’m presenting at Develop:Brighton this year for the first time. But the Narrative motive, the desire to engage with a fictional world, and the connected desire to relate to characters in a story that builds to a climax, is particularly powerful because it works for just about everyone, which the Victory, Problem-solving, and Acquisition motives don’t – despite their incredible power over players for whom these experiences are key to their enjoyment of games. Players love stories because stories are what humans do… and games are perhaps the most amazing, surprising, and unexpectedly rewarding narrative medium we have yet discovered.